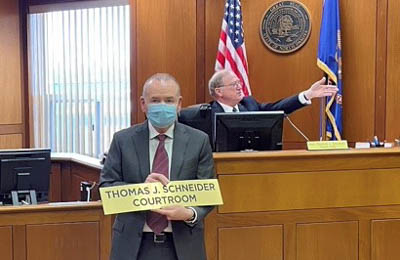 The Morton County Commission voted unanimously to approve the name change.  Judge James Hill presided over the special session of court in which he reflected on Judge Schneider’s 38 years of service to the judicial bench.   Judge Schneider was elected as a municipal judge in 1982 and served as a judicial referee until 1986. He became a county judge in 1986 and a district judge in 1994.

Judge Hill reflected on Judge Schneider’s patience, respected approach to the judiciary, unique trial style, and how he decided cases with wisdom, compassion, and respect for all those who appeared in front of him. 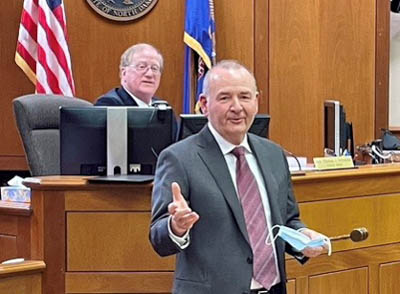 Judge Schneider thanked all in attendance, recognizing his court reporter, Jane Gillig, for her outstanding service.

A name plate will be placed on the outside of Courtroom 305 and a plaque will be displayed inside the courtroom as a tribute to Schneider’s legacy.

The plaque reads: "Thomas J. Schneider Courtroom. Dedicated December 31, 2020. Thomas J. Schneider started his judicial career as a Mandan Municipal Judge and a South Central Judicial Referee in 1982.  He was then elected as a County Judge in 1986 serving Morton, Grant and Sioux Counties.  In 1994, he was elected South Central Judicial District Judge and served until his retirement on December 31, 2020. The Honorable Thomas Schneider was born in Dickinson, North Dakota and grew up in Morton County.  He has continually served the citizens of Morton County for thirty-eight years.  He is a respected member of the judiciary, a trusted colleague, and a conscientious jurist." 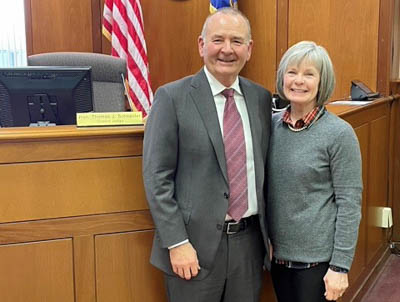 Judge Schneider and his wife Rita posed after the ceremony in front of the bench in the Thomas J. Schneider Courtroom.