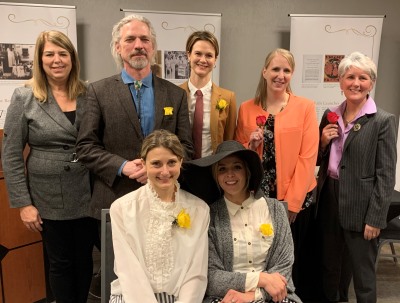 Unsuspecting guests at the event were asked to choose a rose (yellow or red) as they entered the presentation room.  Guests were not initially told about the meaning behind the roses.

In 1872, Susan B. Anthony was arrested, indicted, tried and convicted for illegally voting in the Presidential election.  A reenactment of the Susan B. Anthony trial was performed at the event.

Justice McEvers played the role of Judge Ward Hunt who presided at the trial. 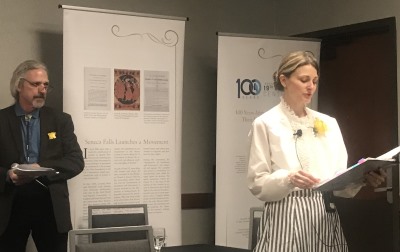 Shannon Parvey of Parvey, Larson and McLean, PLLC played the role of Richard Crowley, the U.S. Attorney who prosecuted Ms. Anthony.  Mary Batcheller with Maring Williams Law Office, P.C. played the role of one of the witnesses, Mr. Beverly W. Jones.  Erin Larsgaard with Wold Johnson, PC was the moderator.  Other members of the group who helped put on the program included Conor Smith, Law Clerk to Judge Alice Senechal, District of North Dakota and Lisa Gibbens with Senator Cramer’s office.  Some wore costumes. 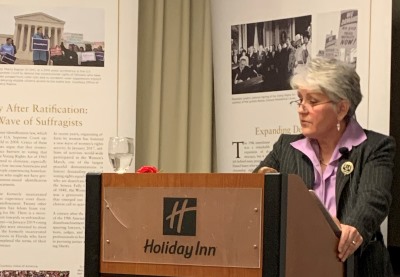 The reeanactment was followed by Justice McEvers giving a speech on what ratification means today.  During her speech she highlighted some of the government positions that North Dakota Women have held since gaining the right to vote and the right to hold government offices. The room where the event was held was decorated with posters from the American Bar Association's 19th Amendment Traveling Exhibit.