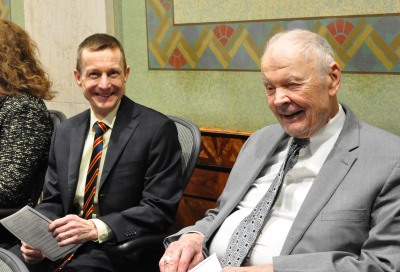 For North Dakota Supreme Court Justice Jerry VandeWalle, ’55, ’58, HON ’15, the Capitol in Bismarck is home away from home. After all, it is where he has spent most his time for the last six decades. First, in the North Dakota Attorney General’s office; later, as a justice on the North Dakota Supreme Court; and, eventually, from 1993 on as Chief Justice on the Court. Justice VandeWalle stepped down as Chief in December, but continues to serve on the Court at the wise age of 86.

Knowing each nook and cranny of the capital building like the back of his hand, Justice VandeWalle leads us on a tour down the long and spacious sunlit hallways. He smiles and says, “hello” to almost everyone he meets ─ knowing most by their first names.  He is intentional and genuine with his actions and words, displaying a true and thoughtful interest in others. He leads us up a staircase to the second floor of the building where we enter a beautiful historical courtroom. This, he explains, is where the Supreme Court convened years ago.